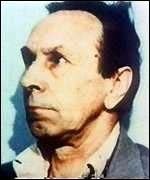 Leslie Bailey, was a convicted paedophile and murderer who was involved along with Sidney Cooke and Robert Oliver, in the murders and sexual abuse of at least three young boys in and around the London area in the 1980's.

Bailey was sent to trial, along with Cooke and Oliver, for the 1984 murder of seven year old Mark Tildesley. Bailey was already in prison for the 1985 killing of Jason Swift but was also jailed for Mark's murder in 1992. He seemed to be the only one of the gang who would admit to his crimes.

Otober 1993, Bailey was murdered after being attacked in his prison cell by two other prisoners.

Sidney Cooke, Nicknamed "Hissing Sid" by friends,  travelled around the country working fairgrounds he often worked on a test Your Strength machine, where he would meet innocent youngsters that he would go on to abuse and sometimes kill.

Cooke's first known victims were two teenage brothers who'd spent part of their childhoods in care. Groomed and manipulated by Cooke, in the 1970s and early 80s they wound up travelling with him around with him and the fair. They were so relentlessly abused they believed that abuse was part of a normal relationship between an adult and a child.

The involvement of Cooke, Bailey and Smith in Mark Tildesley disappearance did not come to light until two of the three men were serving life sentences for killing Jason Swift.

Bailey was the only one convicted of a crime in relation to Mark's death, after he pleaded guilty to manslaughter in 1992. The CPS decided that prosecutions against Cooke and Smith, who had never admitted to being involved in the boy's death, would fail because they relied too heavily on Bailey's testimony.

Jason Swift
November 1985, Jason's body was found dumped in a field in Essex. He had been drugged, sexually assaulted and asphyxiated.
The attention of police was drawn  to Sidney Cooke's gang, which operated out of a squalid council flat on Kingsmead Estate in Hackney, Investigations revealed that the flat had been the scene of Jason's death, where it's thought members of the gang had sex with the teenager.

When the case came to trial in 1989, the members of Cooke's gang all blamed each other for causing Jason's death, and there was only enough evidence to convict four of them on the basis of manslaughter.

Oliver changed his name to Francis Lee in prison and was released in 1997 after serving 10 years of his 15-year sentence.

Lennie Smith
Implicated in the deaths of Mark Tildesley and Jason Swift, but never charged in connection with them, Smith was finally jailed in 1992 for a string of sex attacks on a 6-year-old boy he'd been left to baby-sit. He was released into a prison housing unit for former sex offenders in 1999, and died of an AIDS-related illness in 2006.

Sidney Cooke
During his time behind bars for his involvement in Jason Swift's death, Cooke refused to participate in treatment programmes for sex offenders. It's claimed he became a centre of attention for other paedophile convicts, who were in awe of the depths of his depravity and the fearless way he pursued children.

Cooke was eventually released on parole in 1998, causing a public outcry

1999, a year after he was paroled, Cooke was arrested  on 18 sex charges occurring from 1972-1981, many of which had come to public attention after they were reported on in the Channel 4 documentary Dispatches. He admitted  ten sex attacks against two brothers over several months in 1972-73, but denied the remaining eight charges, which were abandoned by the judge. He blamed sexual abuse he had suffered as a child. He received two life sentences, with only a five year parole period Police continued to investigate the killing of Tildesley.